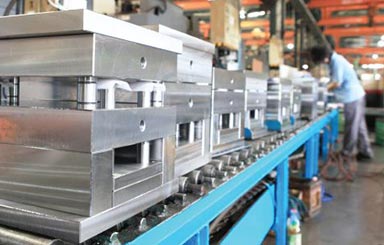 Before the model sand table of the project of the exhibition center for investment attraction, President wang listened to the general situation of the park, construction idea, development situation, investment attraction, industrial agglomeration effect, etc., and got a detailed understanding of the construction of the park, enterprises in the park, peripheral supporting facilities, etc., and expressed affirmation and appreciation for the achievements of the park. BS9 mould alliance network

Round-table conference room in the company, George was introduced in detail after listen to the PPT of park in kunshan die set enterprise development present situation and the idea of the overall relocation, said, this is entrusted by the association to visit ningbo south of binhai new area and mould park, if the various conditions and policy from the government in accordance with requirements, the next step will be leading association units to discuss further. In addition, wang also expressed that as ninghai changjie people, hope to return to ninghai development, for the development of the local mold industry to make contributions. Director sun of China merchants bureau also made a detailed introduction on the development of the binhai new area in the south of ningbo and the achievements made by attracting investment. Finally, zhang introduced in detail the regional advantages, industrial agglomeration, development potential and radiation in the binhai new area in the south of ningbo. Ninghai mould industry has a strong foundation and strong development momentum. It is the first choice base for kunshan formwork and formwork enterprises to relocate as a whole. We hope to keep in close contact and communication.